The older I get, the more I enjoy New Year’s. When I was younger it was more about going out with friends and staying up late (without alcohol). Now it’s about goal setting, starting fresh, turning a new page and developing new habits while striving to become a better person. I don’t know about you, but I’m ready for 2019 to be over. We had a very tough year and I’m ready for 2020. Today I’m doing a recap of how the past 12 months has been for us and then I’ll share some of my goals for the upcoming year as well. That being said, it’s a little bit of a longer post than my usual, so, here we go.

January: We had just moved back from Montana a couple weeks prior and still dealing with the stress of moving out of state twice. It was tough as we were getting settled into our apartment, our jobs, and finding normalcy. Since we had moved so much the previous year, our finances took a hit. So, we decided to start Financial Peace University. At this point, we were sick of the payments looming over us. This was both an exciting and scary decision. I’m so glad we did this.

February: We were crushing our financial goals, selling a ton of things we didn’t need anymore and by doing that we completed Baby Step 1, which was to establish an emergency fund of $1,000. The stress was already starting to ease up and we were starting to feel like we can do this. We were also shocked by the sudden news that Sam’s mom was diagnosed with cancer.

March: We moved on to Baby Step 2, which was to attack the debt. This was the first time we really added up all of the debt we owed, it woke us up. We cancelled our credit cards and cut them up. While working toward getting out of debt, we also worked toward a healthier lifestyle. Meanwhile, I had been wanting to take the plunge with blogging and finally did, with the loving encouragement from my sweet husband. I created my own domain name and started telling people about it. This was a big step because the thought of promoting myself was intimidating. I also made a decision to open the door to my mom’s side of the family which I have never known before. This was the beginning of creating a relationship with a family I never believed would ever be possible.

April: We started looking at houses and placed an offer on THE house. We were still rocking the debt snowball, the financial stress was becoming less and less. Sam sold his truck and bought his grandmas old 1990 Ford Taurus. (By the way, it has 45,000 miles) We really took to heart the motto “Live like no one else so later you can live and give like no one else.” We spent every opportunity we could to spend time with Sam’s mom.

May: I sold my car the week after Sam sold his truck, making us a one vehicle household. I started using the bus to get to work and discovered it wasn’t as bad as I thought it would be. Not long after that, Sam surprised me with a battery powered bike and I started taking it to work. Our apartment became box city as I was packing up our things (again). As things were running smoothly, our closing date was moved to a sooner date. Three days before closing, however, plans changed and everything depended on the sellers. Everything was up in the air. It was very frustrating. (Go to the link We’ve Got a Surprise! to read the full story) Sam took his mom to see The Beach Boys in concert, she was very excited. This was also the last time she could go anywhere as her health continued to worsen. That night was a huge highlight for her and was very happy she had the chance to go.

June: I was still riding my bike to work. We were also getting settled into our new house and making it a home. My mother-in-law’s health took a rapid decline and we spent as much time with her as we could. She passed away the last week. Those last days leading up to her death were the hardest but I’m so glad we spent that time with her.

July: We ripped out the carpet in the living room and the project spilled into the kitchen. We ripped up the flooring, replaced it with new laminate and painted the cabinets. It was a big project and lasted much longer than we anticipated. Working towards getting out of debt slowed down as we worked through the grieving process. We were very thankful that we had paid off $30,000 at that point and did not have any car payments. To see more photos, go here Our Kitchen Facelift.

August: Sam turned 40, which was a big turning point. He began a new hobby with carpentry and became a really good at it. We also took a spontaneous trip up north and was exactly what we needed. On the last week, we found a used car with 75,000 miles and got it for $1,800. I was thrilled to finally have a car that’ll take me from point A to point B. I did not (and do not) care about what it looks like, all that matters is that it runs.

September: Sam severely hurt his back and could not return to work. What we thought would be just a few days on sick leave, quickly became an indefinite circumstance. He is not one to just sit around, he is a go-getter and gets things done. So this was very difficult for him in so many ways. At my job, however, we had quite the turn over, which was good timing because I had overtime hours readily available. With Sam’s back being the way that it was, I got into survival mode and signed up for as many hours as I could. I wanted to ensure that we would have money in savings and also allow Sam to stay home.

October: We celebrated 3 years of marriage. Our situation remained the same. Sam had appointment after appointment, follow up after follow up. He was seeing the doctor like it was his job and he was growing tired of the appointments. I can’t say that I blame him. He soon found out that he had a bulging disk and the doctor ordered him to participate in the Spinex Program, which is a more intense form of PT and focuses on the spine. I continued to pick up more hours while also taking a class for PTCB (Pharmacy Tech Certification Board). Lots of studying and working on my part.

November: Sam’s back started to improve with the spinex treatment. He started developing a routine to maintain his stretches and really started to see a turn around. I was still in survival mode and worked 50 hours a week. Anytime more hours were available, I took it without hesitation. Putting money towards debt was not an option for us at the time but we continued to pour into our savings and maintain our budget. At the end of the month, we got a pretty big snowstorm. Sam and I worked hard at that snow. I’m proud to say that Sam celebrated 5 years of sobriety as well. 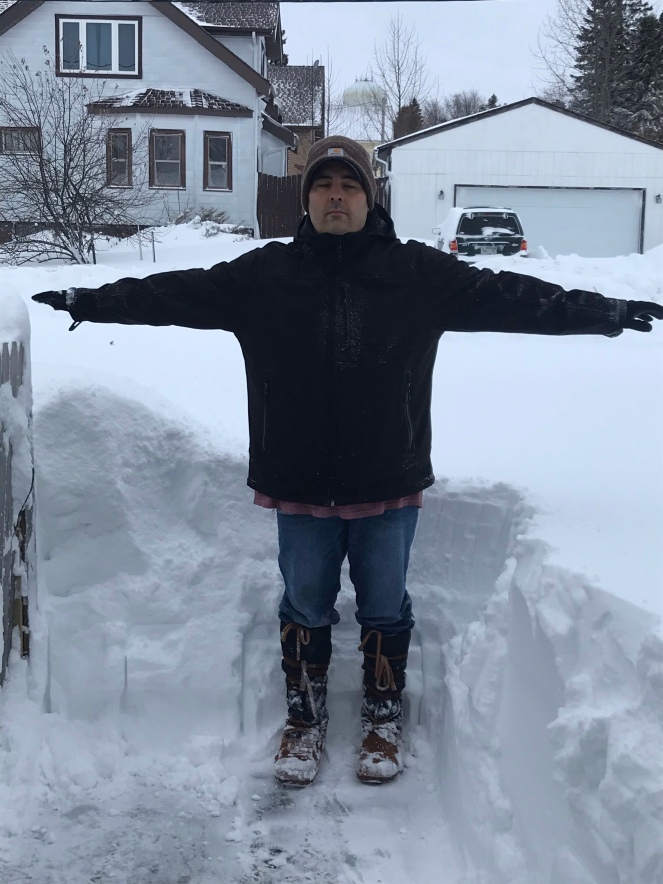 December: I invited my aunt over for dinner. This was a big deal as she and the rest of my mom’s sisters have been totally distant. I have grown up seeing them through my mother’s lens and have recently learned that they are nothing what my mom has portrayed. I look forward to getting to know the rest of my family and seeing where this relationship goes. We have also been working towards a healthy routine and lifestyle. Our goal is to develop healthy habits and preventative health. Sam has recently been cleared to go back to work in January. I am still working a lot of hours. We have talked about doing this for a few years but this year, we decided to stop celebrating Christmas. This is the unpopular opinion, I know, and one that I will address in a later blog post.

This was a very challenging year but I do believe that this made our marriage stronger. Looking back on September to now, I did not believe I had it in me to work all of those hours. Through this, I became stronger and developed endurance. I also believe that God gave me strength to carry on. I’m also very proud of my husband. If he was not doing his stretches everyday and doing the little things that get boring and annoying, he wouldn’t have strengthened his back the way that he has. By watching him go through this, he has taught me to be consistent with the little things, even if it feels like it doesn’t matter, because eventually it will matter. As we are on our last day of 2019, we have set some goals. We want to live healthier lives. We want to focus on foods that will be nourishing to our bodies instead of damaging. I want to develop a firm routine, learn to make things, and try to save money while doing it.

How do you feel 2019 went for you? Did you have a year that was full of blessings or did you have a year of hardship? What I have learned through all of this is that there is always a blessing even if you don’t see it at the time. Stay strong and carry on.

Published by Living with the Leals

Hello! Welcome to my page! My name is Amy. I've been married to Sam for two amazing years. No kids and no pets, just us enjoying our time together. On my blog you will find many of our adventures as we explore life on the road. Check out my Fiverr gig if you need any proofreading or editing. https://www.fiverr.com/s2/83fd5dc0ba?utm_source=CopyLink_Mobile View all posts by Living with the Leals

This is a text widget. The Text Widget allows you to add text or HTML to your sidebar. You can use a text widget to display text, links, images, HTML, or a combination of these. Edit them in the Widget section of the Customizer.